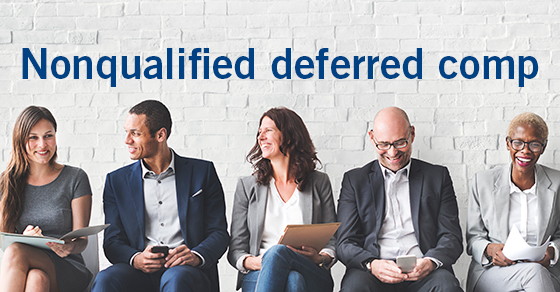 Nonqualified deferred compensation (NQDC) plans pay executives at some time in the future for services to be currently performed. They differ from qualified plans, such as 401(k)s, in that:

They also differ in terms of some of the rules that apply to them, and it’s critical to be aware of those rules.

What you need to know

Internal Revenue Code (IRC) Section 409A and related IRS guidance have tightened and clarified the rules for NQDC plans. Some of the most important rules to be aware of affect:

Timing of distributions. Benefits must be paid on a specified date, according to a fixed payment schedule or after the occurrence of a specified event — such as death, disability, separation from service, change in ownership or control of the employer, or an unforeseeable emergency.

Another important NQDC tax issue is that employment taxes are generally due when services are performed or when there’s no longer a substantial risk of forfeiture, whichever is later. This is true even though the compensation isn’t actually paid or recognized for income tax purposes until later years. So your employer may:

The penalties for noncompliance can be severe: Plan participants (that is, you, the executive) will be taxed on plan benefits at the time of vesting, and a 20% penalty and potential interest charges also will apply. So if you’re receiving NQDC, you should check with your employer to make sure it’s addressing any compliance issues. And we can help incorporate your NQDC or other executive compensation into your year-end tax planning and a comprehensive tax planning strategy for 2016 and beyond.